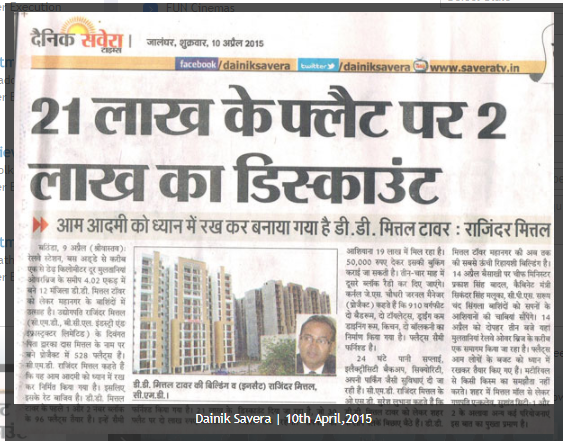 People of the city are eagerly waiting for D D Mittal apartments of 12 storied on 4.02 Acres which is nearly one and a half kilometer away from bus stand and railway station and near to Multaniya fly over. Sh. Rajendra Mittal (MD of BCL Industries and Infrastructure Ltd) in the remembrance of his father Late Sh. D D Mittal constructed 528 flats. Sh. Rajendra Mittal told that they have constructed the flats in view of the common man. That’s why the rates are reasonable. Block 1 and 2 consisting of 96 flats have been constructed and are ready. The 21lakh flat has a discount of 2lakh. They are semi furniture flats. Giving 50000 you can book the flats. Within three months the next block will get ready. Col. J S Chowdhary General Manager (Project) tells that in 910sqft, 2 bedrooms, 2 toilets, drawing cum dining, kitchen, 2 balconies have been implemented. Flats are semi furnished. 24hrs water supply, electrical backup, security, own parking space. OSD Mr. Suresh Labana told us that D D Mittal tower until now the tallest flat. 14th April on Baisakhi festival Chief Minister Mr. Prakash Singh Badal, Cabinet Minister Mr. Sikandhar Singh Maluka, CPS Mr. Swaroop Chand Singla etc will hand over the keys of flat to the owners.