All Over Country BCL ranks 338 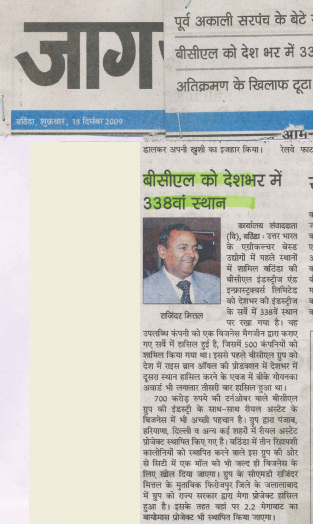 Placed in the first place of North India’s agriculture based industry, Bathinda’s Bathinda Industries & Infrastructure Limited Chemicals Limited of Shri Rajendra Mittal was ranked 338. This company was included among the 500 companies during the survey held by one of the business magazines. Before this BCL group had been placed second in nations rice bran oil production leading to its third consecutive B.K Goenka award held in December.

The 700 crores turnover BCL company has recognized not only in industry but also in real estate. The group has its real estate business in cities like Punjab, Delhi, Haryana etc. Establishing its 3 posh colonies at Bathinda, this group will establish a mall in the city for business opportunities. In brief meeting with CMD Sh. Rajendra Mittal, he mentioned that in Jalalabad at Firozpur District, the group has got permission from the regional government for commissioning a mega project. According to the plan, a 2.2MW Biogas plant will be erected