HomegalleryMediaBusiness Standard marks BCL as 401st in the 1000 listed companies…

Business Standard marks BCL as 401st in the 1000 listed companies… 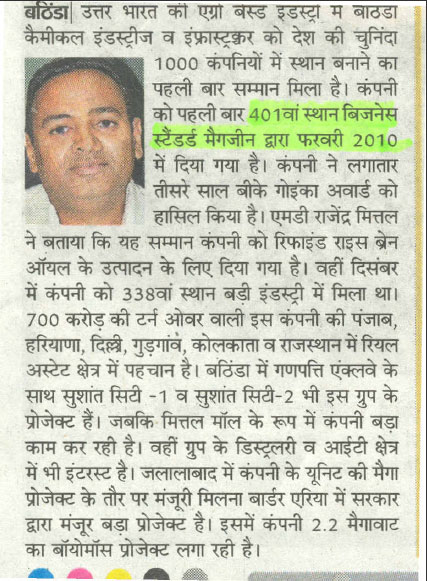 BCL Industries and Infrastructures Limited one of the North India Agro Based Industry, was ranked 401 among the 1000 companies listed in Business Standard Magazine, in February 2010. The company was awarded by B.K. Goenka Award for the third consecutive time. MD Sh. Rajendra Mittal mentioned that the award was for being Second Highest Producer of Refined Rice Bran Oil in the country. In December, the company ranked 338 among the largest industries listed. The 700 Crore turn over BCL has recognition in the real estate business in cities of Punjab, Haryana, Delhi, Gurgaon, Kolkata, and Rajasthan. In Bathinda, this group has projects named Ganapati Enclave, Sushant City 1 and Sushant City 2. It is also into bigger projects like Mittal Mall. The group also has shown interest in the distillery and IT area. The Group got a grant from the government for a mega project at Jalalabad in a border area. The company will generate power of 2.2MW using biogas fuel.