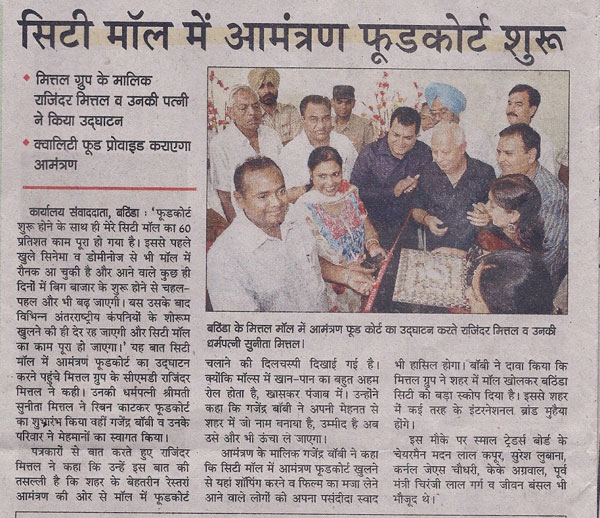 “With commencing of the food court, the target of 60 major task gets completed. This includes the opening of cinema hall and Dominos that has improved the presence of the mall, and incoming few days the opening of the big bazaar shall improve the ambiance of the mall. There after the opening of international showrooms in the mall shall be left and this shall complete the work of Mall” told by CMD of Mittal Groups Sh. Rajendra Mittal who had attended during the inauguration of Amantran at the city mall. His wife Sh. Sunithi Mittal opened the food court cutting the ribbon, accompanied by Mr. Gajendra Bobby along with family welcomes the guests. In conversation with reporters Sh. Rajendra Mittal told that Amantran is popular in the town and they had shared their interest in opening food court in the mall. Since the food court plays a significant role in the mall, especially in Punjab. He also mentioned that Mr. Gajendra Bobby has put tremendous efforts in building Amantran’s image in the city, and he shall continue to maintain the same here.
With this Amantran’s owner, MR Gajendra Bobby told that the food court shall provide food that will attract the shoppers and people coming for movies. He added that the opening of City Mall has opened golden opportunities of business scope. He concluded that this shall give opportunities to international brands.
To grace the occasion there were great personalities like Samal Trust Boards’ Chairman Mr. Madhan Lal Kapoor, Mr. Suresh Labhana, Col. J.S Choudhary, Mr. K.K Agarwal, Former Minister Mr. Chiranji Lal Garg and Mr. Jeevan Bansal were also present.