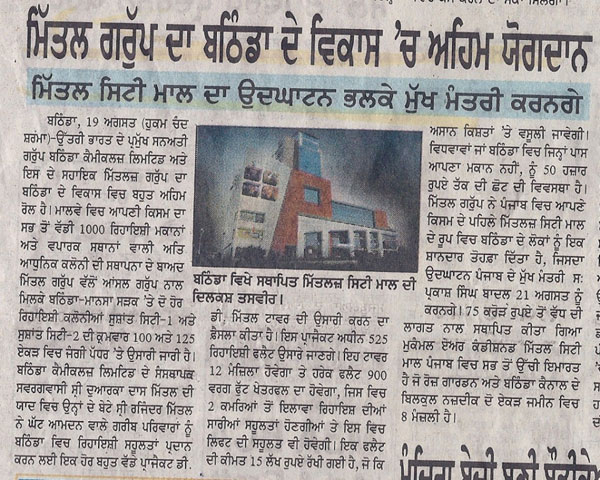 One of the main groups of north India, Bathinda Chemical Limited and other groups of companies of Mittal Group has played an important role in the development of Bathinda. After the 1000 residential houses and buildings, Mittal group in association with Ansal Group are coming up with Sushant City I and II in 100 and 125 acres of area respectively at Bathinda. In the memory of founder Sh. D.D Mittal his son Sh. Rajendra Mittal has introduced a new project naming D D Mittal towers which will provide residential for poor income family. There are around 525 residential flats. This tower will be 12 floors high. Each flat will be 900sq ft. with 2 BHK and other required facilities. Lift facility will also be there. The price of each flat has been fixed to 15lakhs that can be paid in installments. There is also a discount into 50K for the widow and those who don’t have their own house. Mittal group has given a great gift to Bathinda city in the form of Mittal City Mall, which will be inaugurated by CM of Punjab on 21st August. Mittal City Mall has a capital investment of more than 175crores, being fully air conditioned and is the biggest building in Bathinda. It is located near Rose Garden and Bathinda Canal. It is built on 2acers having 8 floors