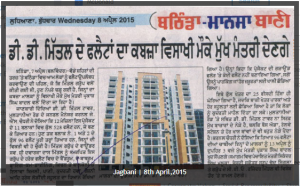 DDMT Flats by Mittal Group have finally seen completed and possession will be given by Chief Minister Mr. Prakash Singh Badal. GM of DDMT Col J S Chaudhary gave information that there are II blacks with 12 floors and in total 528 plots which are ready. Till now 96 flats from block II are completely ready and have also been sold. Constructed in the memory of founder of Mittal Group Late. Sh. Dwarka Das Mittal every flat has two bedrooms, with attached bathroom, dining cum drawing room, kitchen and balcony. Besides this basic amenities like water, electricity, natural air and light are available. . He told that no flats have been made at ground floor the space has been kept for parking facility. Only 25% of the space has been considered and rest of the space for the parks. DDMT is nearer to market railway station and bus stand. Col. Chaudhary told that the keys of 96 flats will be given by Chief Minister Mr. Prakash Singh Badal on 13th April at 3pm. On the occasion Minister Mr. Sikander Singh Maluka, Mr Singla and MD of Mittal Groups Sh. Rajendra Mittal shall be present.

how can we help you?

Contact us at the Consulting WP office nearest to you or submit a business inquiry online.